One of the greatest difficulties of cooking is time.  When you work full time and have other commitments after work (honestly, who doesn’t?) it’s difficult to find time to cook for yourself.  My former roommate, Amy, is a mechanical designer.  Almost all of the engineers that she works with are married men.  Most of their wives are stay-at-home moms.  Work gets hectic and sometimes she and her coworkers have to work crazy long hours.  When her coworkers get home from these crazy long days, their wives often have dinner waiting for them.  When Amy gets home from a crazy long day, she has a Lean Cuisine frozen pizza waiting for her. (Nothing against stay at home moms – I’d really like to be one someday. I have huge respect for them because I know there’s a heck of a lot more to it than putting dinner on the table.  Nothing against Lean Cuisine frozen pizza either.  It’s gotten me through some tough times, too.)

Amy doesn’t spend much time cooking because she doesn’t have a whole lot of time.  This means that Amy sometimes doesn’t eat as well as some of her co-workers do.  Amy deserves good food just as much as they do.  What Amy needs, and what we all need, is for someone do some of the cooking for us.  That, my friends, is exactly what Principle #2 is all about.

My Single Servings Principle #2: Let the grocery store do some of the work.

If you’ve got all of these things on hand, then you’ve got a meal.  Toss together some shredded rotisserie chicken, shredded carrots, sliced mushrooms, and pre-washed spinach.  In bowl or jar, combine 1/3 cup pesto with 1/4  cup red wine vinegar and you’ve got yourself a salad dressing. Toss the dressing with the salad and voila!  Dinner is done and all you had to do was pull out the ingredients and mix up the dressing.

I love rotisserie chicken.  The summer after I graduated from high school I worked in a supermarket deli.  Be nice to the people who work at your supermarket deli – their job is really miserable.  I hated that job!  But one thing that it did teach me (aside from the importance of a college degree) is that – given the choice between fried chicken and rotisserie chicken – choose rotisserie.  In fact, given the choice between a chicken roasted at home and a rotisserie chicken – choose rotisserie.  How did I learn this? From cleaning the chicken fat out of the rotisserie machine each night.  A huge bucket of fat.  It was disgusting and it smelled awful.  But I thought, “Much better for that fat to be here in this bucket than still in the chicken.  Especially since the chicken tastes pretty good without it.” When you fry chicken, there’s no bucket of chicken fat to drain out of the machine at the end of the day. Why? Because gets fried in more oil!  Does this seem counter-intuitive to anyone else? On rare occasions, I do still eat fried chicken. But given the choice between rotisserie and fried, I always choose rotisserie.

Here’s another reason why I love rotisserie chicken – its cheap!  Especially at Costco, which is where I always buy mine. A whole, uncooked chicken and a rotisserie chicken often cost about the same amount.  So why not let Costco cook my chicken for me?  I almost always buy one when I am there. And just in case shredding a chicken is a foreign concept to you, or in case you are looking for a more efficient/less messy way of shredding chicken, I’ve included a tutorial for you.

It’s much easier and less messy to shred your chicken if you do it the same day that you buy it. You can refrigerate it and do it later if needed.  However, I find that I forget about it if I don’t shred it as soon as I get home.  Also, after you refrigerate the chicken, the juices in the bottom of the container will become gelatinous, which is not exactly pleasant when you’re trying to shred it.  Grab a cutting board, a knife, and some quart-sized freezer bags.

If your chicken came in a container with a top and a bottom, like mine, don’t throw them out. Use the bottom container for the skin and bones that you will remove and throw out. Use the top container for the shredded chicken.  I always start by removing the legs and the wings.  They are easier to shred when they are not attached to the rest. Just use your knife to cut through the joints and then pull.  Remove the skin as you remove each piece.  To shred, you can either use two forks or your fingers.  For the legs and wings, I usually use my fingers. I also find it is easier to shred the breast meat when it is removed from the bird. Sometimes it pulls off pretty easily and you don’t need your knife.  Or you can run your knife down the center and along the breast bone to remove the breast meat.  If you want to remove the breast meat cleanly, you should also remove the wish bone up by the neck cavity.  Since I’m just going to shred the meat, I usually don’t bother with the wishbone until I start shredding.

I always use two forks to shred the breast meat.  Get as much meat off the back as you can, too.

Once I’m done shredding, I like to mix the meat up a bit before I package it so that I don’t get one bag of all white meat and one bag of all dark meat.  I put about 1 – 1.5 cups in each bag.  I also always set some aside to make a salad for dinner that night and lunch the next day.  This is important because it takes some effort to shred a chicken and when you’re finished you probably won’t want to cook anything else.  If you’re shredding your chicken on the same day you bought it from Costco, then you really won’t want to cook anything else.  Costco wears me out.

My favorite thing about the rotisserie chickens with a top and bottom lid is that when I’m done shredding and bagging, I just put the lid on it and throw the whole thing out.

I’ve thought about making a chicken stock out of the leftover bones, but then I’d have to give up prime freezer real estate for chicken stock.  Not worth it. And did I mention that I’m sometimes a bit pressed for time? 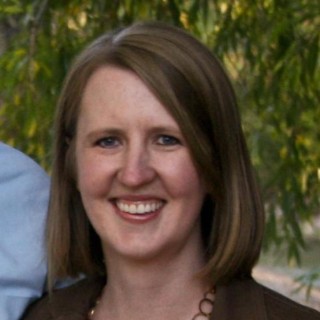 My name is MaryAnn and I am passionate about about teaching math, cooking, violin, fitness and pi/pie.